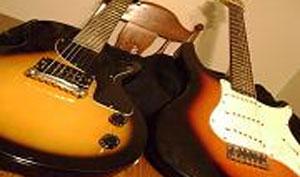 A Hands On Review of Rock Prodigy
Reviewer Rating: 4 / 5 Stars
What does a full time music education teacher think of Rock Prodigy? Can it really teach you to play the guitar? Absolutely!
Apps that try to teach you to play an instrument seem to be a dime a dozen these days.  Most of them tend to be rather thinly written and difficult to follow, or at the very least fail to teach all of the necessary skills, opting instead to gloss over things and provide the bare minimum required to teach the skills.  A few apps in the guitar category do it right though, and Rock Prodigy by The Way of H, Inc. is one that seems to be off on the right foot.  I admit to being the world's worst guitar player, and although I can play almost every instrument there is, strings have always stymied me.  Did Rock Prodigy manage to teach me how to play the guitar?  Read on to find out.

Getting Started With Rock Prodigy

I pulled out my old acoustic that had been sitting in the closet for several years, tuned it up using Rock Prodigy’s built in tuner, and got started on the first few lessons that ship with the app to get a feel for how it works.  At first I was worried, especially when I saw that Rock Prodigy uses the same scrolling “Guitar Hero” kind of interface.  I had always hated this kind of scroller, mainly because of my background as an instrumental music teacher in the public schools, but I actually found myself pleasantly surprised in how it is used and how the voice over tutorials move through the material.

As you play the app also listens to you, telling you in real time how you are doing on each note.  Using the iPad’s built in microphone the app does a very good job of critiquing your accuracy.  It does not give any educational feedback though other than to tell you how you scored at the end of each lesson.  The listening and grading feature of the app though is quite impressive given that other companies who deal specifically in this area (such as the previously reviewed SmartMusic) cannot seem to figure out how to make real time recording and grading work on an iPad app.

The instruction in Rock Prodigy starts out slow, which is a very good thing.  Concepts like picking and how and where to place your fingers on the frets are described in detail and the scrolling practice sessions repeat things many times, allowing the ideas to more firmly take root.  As mentioned, the early lessons move pretty slowly, if you have played around with the guitar before you may be tempted to jump ahead, but in general I’d recommend staying the course and methodically moving through each lesson, repeating it if you have the time and if you had any difficulty at all with it the first time through.

As for the breadth of instruction the Rock Prodigy app ships with only a limited amount of lessons but more are available through in app purchases and downloads.  There are literally dozens of free lessons available for download to allow you to expand your techniques and abilities.  There are even more advanced techniques, scale patterns, and chord lessons too numerous to count.  If all of these do not keep you busy there is another list of more well known songs available as well.  There are freebies here too, but popular songs by major rock artists sell for $3.99 each.

A High Price Tag But Worth It

So the big question is whether or not Rock Prodigy is worth the $19.99 price of the app.  Given the huge amount of included lesson material and the nice way everything is presented I would have to say that yes, you will get your money’s worth if you buy it.  On the down side the app never seems to get into reading traditional music notation.  While you can turn on note names and chord names in the options they are not enabled by default, and the purist music teacher in me wants people to learn using the correct note and chord terminology right from the start.

These small details aside Rock Prodigy is still a huge improvement over most of the crappy “learn to play an instrument” apps on the app store.  Of all of the similar apps I have looked at in the past Rock Prodigy is the only one that is, without question, a keeper that I would recommend to a student that was wanting to take up the guitar.